Hello, my name is Jonathan Beall and I am the founder of Sertodo Copper, which has been bringing you handcrafted hammered copper goods since 1997.

Sertodo Copper is an international cooperative of master copper artisans, with workshops in Austin, Texas USA and Santa Clara del Cobre, Michoacan Mexico. Our spirit of cooperation and creation directs our vision and growth.

For you, our client, this business is about creating and delivering the highest quality copper product that will meet your needs.

We use 100% Recycled copper to make a product both functional and aesthetic. Our products are made to be used and to give you a lifetime of beautiful service. 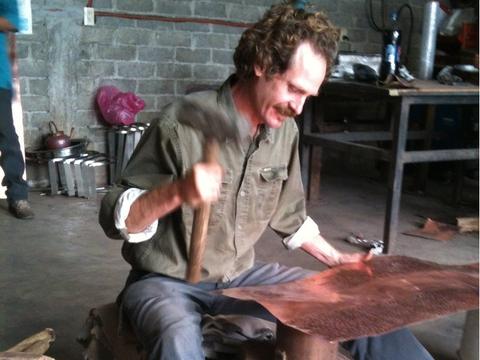 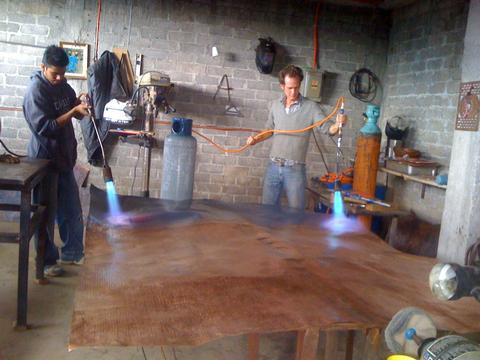 Here at Sertodo Copper, we care about your satisfaction with our products and also with our service. We guarantee the quality of everything we make, and if there is ever any issue with your order, do not hesitate to contact us. This is a small, owner-operated business and we will personally address your concerns in a timely and reasonable fashion.

In this world of mass production, industry, and automaton labor, Sertodo Copper supports a different, more dignified approach to business. We believe that business is mutually beneficial for all parties involved and has vast potential for bringing understanding and cooperation between cultures. Your money is your vote in the economic world and we thank you for patronizing our business!

Each Sertodo Copper piece is individually handcrafted by autonomous artisans in Santa Clara del Cobre, a village located high in the Sierra Madres Occidental of Southwestern Mexico. Their tradition of copper work originated mysteriously over 1000 years ago. Some theories connect its origins with the appearance of Quetzalcoatl, the feathered serpent, a harbinger of peace and culture. Copper religious items, such as bells, first appeared and spread with his cults throughout Mexico.

Other theories compare the techniques for working the copper (which appeared suddenly and without evidence of development) to those found in the South American continent and postulate the existence of intercontinental trade routes, countering conventional theories which dismiss the idea of intercontinental contact.

And some theories simply give credit to mankind's vast potential for spontaneous creativity and ingenuity. Irrespective of the origins, the people of this region held a technological advantage over other nations in Mexico, allowing them to maintain their independence and prosperity, being one of the few nations to fend off submission to the Aztecs. 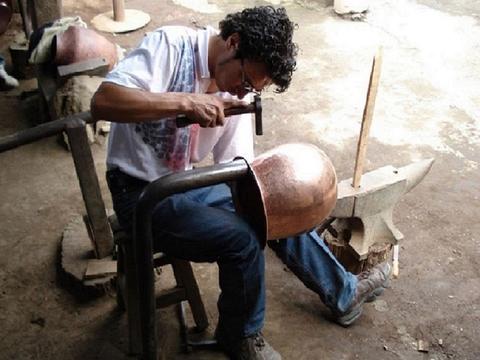 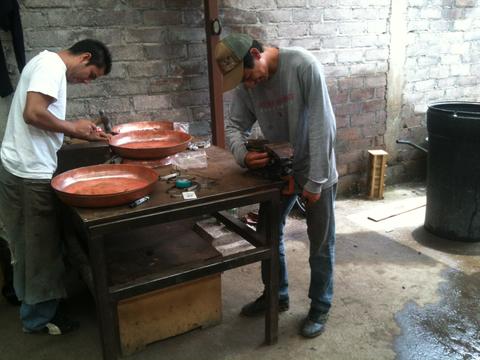 No nation, however, was able to resist the conquest in the sixteenth century by Spain and the Church. The Michoacanos, as they were known, put up a long but inevitably futile resistance and were subjugated beneath a malevolent Conquistador, Nuno de Guzman. Unlike many other peoples of Mexico, salvation actually did come through the Church in the form of a lawyer turned missionary late in his life, Don Vasco de Quiroga.

The Church placed him in command of the Michoacan region as an experiment to implement a utopia. His ideas were based on the utopian ideals set down by Thomas Moore in his revolutionary work of the early sixteenth century, UTOPIA. Quiroga, through education, introduction of new technologies, spiritual devotion and organization, created viable, independent and interdependent communities which to this day continue along the path outlined five hundred years ago. Each community was assigned a trade or craft, such as potters, woodworkers, weavers, metalsmiths, copperworkers, and contributed to the larger community as a whole. Along with the hammer and anvil for working metal, the copper basins were introduced at this time to the region, and have been in continuous production ever since.